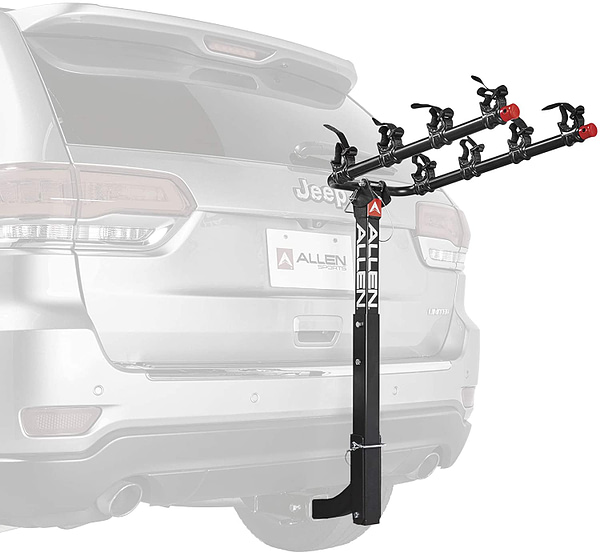 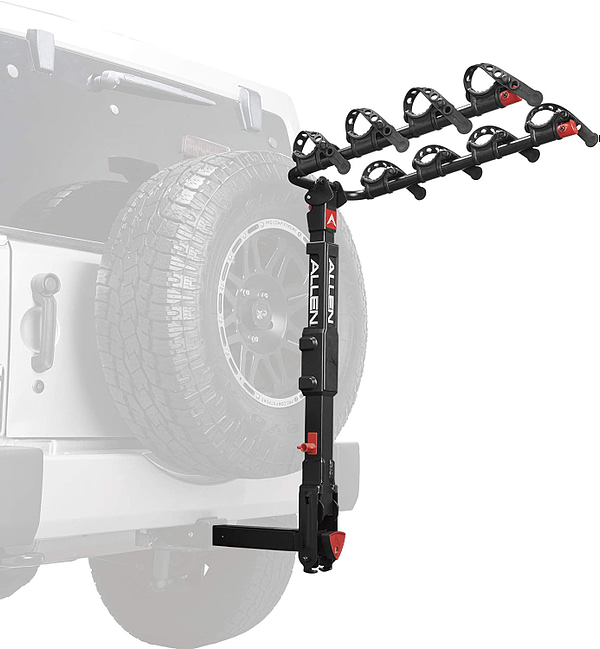 Diamond Leather Steering Wheel Cover with Bling Crystal Rhinestones, Universal Fit 15 Inch Car Wheel Protector
0 out of 5
( There are no reviews yet. )

With only three bolts needed to assemble your Allen Deluxe Hitch Rack, your rack will be out of the box and have you on the road in minutes.

An easy to use, rugged rack to safely transport your bikes

Carry up to four bicycles on road trips or camping excursions with the Allen four-bike carrier hitch. The hitch insert–which fits 2-inch receiver hitches–is easy to operate and super secure for your bikes. Just attach it to your hitch, then use the tie-down cradle system to individually secure and protect the bikes. The carry arm accommodates a wide range of frame sizes and designs, so you can carry your kid-size mountain bike or adult road bike with equal confidence. And you don’t have to remove your bikes to access the back of your truck or SUV, as the rack tilts back for easy lift-gate access and folds out of the way completely when not in use. Also equipped with a no-wobble bolt to keep the rack from moving inside the hitch, the four-bike carrier is colored with a black powder-coated finish.

The carry arms on your rack can be easily folded down out of the way when not in use. This allows for greater flexibility in using your vehicle with the rack installed.

Allen’s individual tie-down system secures and protects your bicycles. The tie-downs are fixed in position on the carry arm, but rotate so that the can engage a wide range of bicycle frame sizes and styles.

The main mast on the rack can be quickly tilted back fro easy lift gate access when the rack is in place on your vehicle.

Allen Deluxe Hitch Racks include the hardware to securely install the rack into your receiver hitch. The included No-Wobble Bolt will allow you to fully tighten the rack in place.

Dick Allen (pictured left in 1972) started Allen Sports in his garage in 1967. Since its founding, the company has been committed to producing the highest-quality, easiest-to-use bike racks and bicycle related products on the market. Dick, a onetime aerospace engineer, opened Allen Sports after building a prototype bike carrier in his Lincoln, Massachusetts shop in his free time. The first ever trunk-mounted bicycle carrier made of electrical conduit, metal strapping, and fire hose casings (for padding) was thoroughly tested on weekend excursions to Cape Cod. Shortly afterward, Allen took his design to market, and by 1971 had established a national presence for his product.

There are no reviews yet.

Be the first to review “Allen Sports 4-Bike Hitch Racks for 2 in. Hitch” Cancel reply